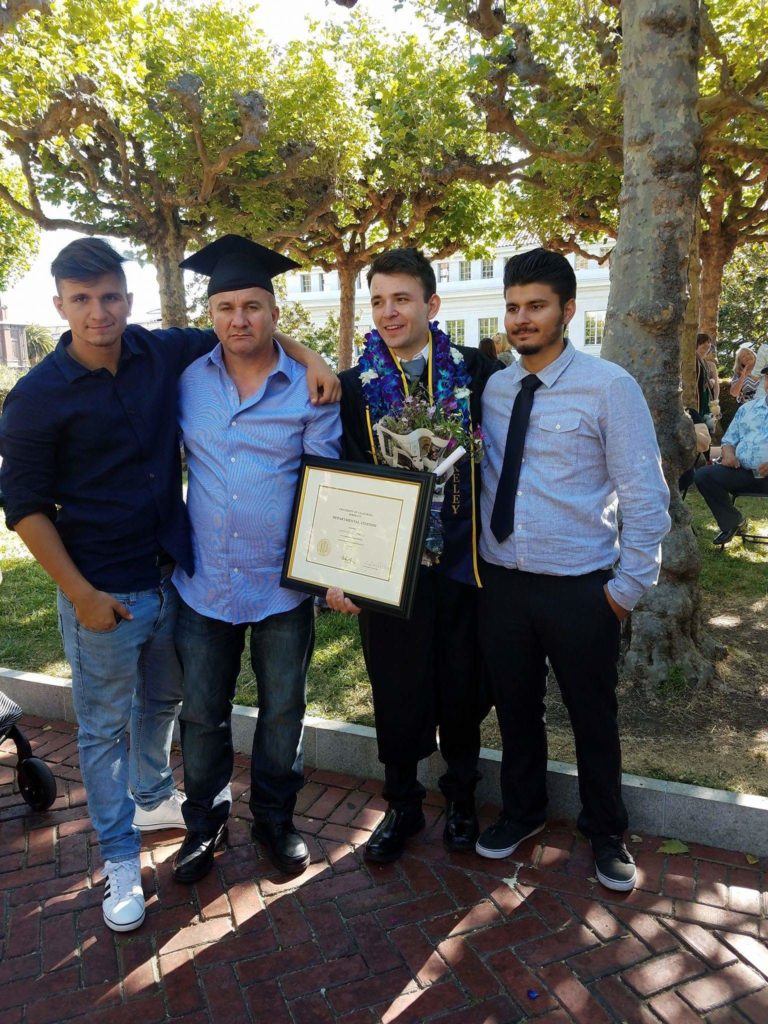 Each year, the Department Citation is awarded to one outstanding graduating senior who is recognized by faculty nomination as having produced exceptionally high caliber work as an English Major. The following speech was given by this year’s winner, Jason Bircea, at the department’s May graduation ceremony on May 20th, 2017.

Thank you chairman. Hello everyone. My name is Jason and I’m incredibly honored to be able to stand up here and share a few words with you.

I thought I’d begin by expressing some gratitude.

Mom, Dad, thank you for always pushing me to pursue an education; you lifted me up here with the hard, slow work of your bones. Thank you. You’ve never asked for anything from me in return. But I mean to pay you back, x1000 times over. I mean to use this degree to give you rest. Wait just a little longer. Love you.

To all the parents, grandparents, children, grand-children, partners, cousins, nieces and nephews, uncles and aunts, and friends who have all made it out here today to show us support and to celebrate with us, thank you. We appreciate you, and we’re really glad that you’re here.

I’d like to thank our illustrious faculty and the kind, diligent Department staff, both for the incredible work they have put in this long year (and every year), and for their boundless generosity.

And I’d like to thank, of course, the graduating class of 2017. I have never met a cast of more exceptional people. The perils of this tumultuous year have, for all their attempts at provoking fear and alienation in us, bound many of us closer together, in and out of the classroom. We’ve studied together, protested together, walked-out together. Saying goodbye to those of you here of whom I’m lucky enough to call a friend is akin to saying goodbye to a sister, a brother, a dope cousin. I’m going to miss you. I wish you nothing but the best.

Finally, I’d like to thank my girlfriend Jill, my ride or die homie. Thank you for believing in me long before I knew to believe in myself.

I want to use this opportunity on stage to talk about why I think our momentous achievement—graduating from UC Berkeley with a Bachelors in English—is so important and critical, and on the real value we can bring to the communities we come from.

I am—as others here are, some of whom I recognize—a first generation, low-income, under-represented minority transfer student. What these labels mean (or fail to mean) is first, that I hail from a family of immigrants (both from Mexico and Romania), and second, that the older members of my family did not have the opportunity to pursue a higher education. The reasons for this are complex, manifold; language barriers are one; lack of access to a good high school education and educational resources another; then there are structural violences: probation, incarceration, fear of deportation; then there is the straight struggle of living in poverty or near-poverty; all the hustles you have to make, all the bills you have to hold in your head and stress on and sulk over – who has time to read Paradise Lost?

I have had the time to read Paradise Lost.

Since I was a kid, my parents talked to me like I was a grown up. And one thing my mother always said to me, and that I want to relay back to all of you now, is this: she said, “Jason, get yourself an education. Study hard, so you don’t have to struggle the way I have to struggle. Lift yourself out of this hard place, then comeback and lift your brothers out too. Lift your cousins and your neighborhood friends out of here. Inspire the people around you, prove that it can be done.”

That’s the challenge my mother set for me since I was a boy; and I want to ask that you consider taking it on too. We did it people; we’re educated, officially certified. But now we’ve got a responsibility to circle back and encourage the people in our communities to pursue an education too. We got to let people know that they deserve an education, a Berkeley-level education. And that they have it in them to succeed. That it’s an ordeal worth undertaking; that the fruits of such labor are transformative and life-affirming. That it is like waking up with new eyes.

Now, I know I haven’t said much about what it is actually like to study English literature here at Berkeley, so I want to go there now. First, I don’t think the English major needs defending; and in fact, at a time in which language is being weaponized against the tenets of truth, justice, and equity, what better subject to study than ours? Who better than us, to cut at the word fat propagated by those who would confuse us, ensnare us.

Instead, I want to quickly speak to the generosity of the faculty here with a personal anecdote.

I probably wouldn’t be standing up here and speaking with you now if Professor Eric Falci hadn’t written me a recommendation letter for the McNair Scholars program, which is a scholarship that provides first-generation, underrepresented students with the resources needed to conduct their own research on a subject of their choice. It was my first semester here, and Professor Falci hadn’t known me for more than three weeks (I was in his “Lyric Verse” class). But I go to his Office Hours, say “Hi Professor Falci, I know you don’t know me well, but I need a faculty recommendation letter for this scholarship I’m applying too. Would you be willing to write one for me?”

This is, it should be noted, a crazy thing to do. You don’t go to a professor you’ve known for three weeks and ask for a recommendation letter.

Professor Falci looks at me, says “Yes Jason, I’ll write you that rec letter.” To this day, I have no idea what he could possibly have written down. But I do know that his recommendation letter got me into the McNair program. Professor Falci didn’t have to do that for me; he could have said, “Listen, you seem nice and you speak up in class, but I hardly know you, I can’t vouch for you.” That’s not what he said though. He said “Yes, Jason, I’ll write you that letter.”

I think just about every one graduating here today has a story like that. The people here are breathtakingly generous. I hope that’s something we can take with us too; to try to do people right, to give them the benefit of the doubt, to extend the unwarranted kindness.

To have studied English literature here at this department is to have grown in the very pit of our bellies something like a vegetable garden; our close communion with the words of the dead a, to quote John Keats, “joy for ever.”

Its loveliness increases; it will never

Pass into nothingness; but still will keep

A bower quiet for us, and a sleep

Full of sweet dreams, and health, and quiet breathing.

I want to thank this Department for fostering in me a deeper love for language, for the way it makes (or fails to make) music; for the way in which language both darkens and illumines, both consoles and leaves agape the aching mouth in need of nourishment, of words.

Class of 2017, I hope that the words you need always come to you. I hope that you continue to find solace in the writers you have taken up during your time here as your own. And I hope that when say, a great aunt asks you to look at her immigration papers, you say something like, “Know what, Auntie? I don’t know much about immigration policy, but I’m Berkeley educated. Let me take a look at that. Let me try to take care of this for you.”

Thank you. And best of luck!