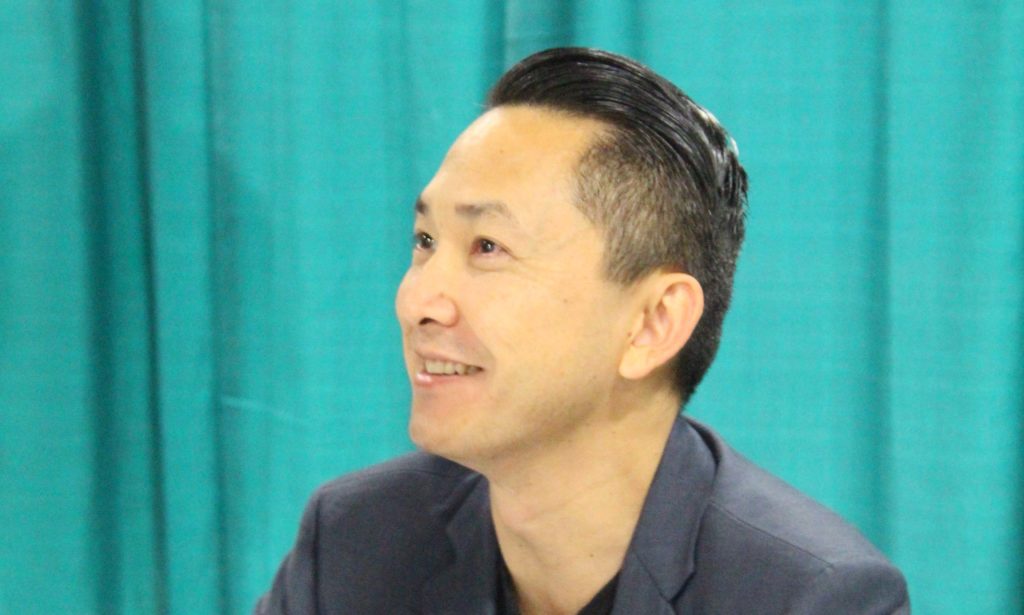 The author, scholar, and MLA member Viet Thanh Nguyen spoke with the MLA’s executive director, Paula Krebs, in October 2017, after he had been awarded a MacArthur Foundation fellowship. His debut novel, The Sympathizer, won the 2016 Pulitzer Prize in fiction.

PAULA KREBS: Congratulations on winning a MacArthur. Do you have plans?

VIET THANH NGUYEN: I run a blog called Diacritics, which is the leading online source for Vietnamese and diasporic arts, culture, and politics. I started that on my own, run it on my own. So I’m going to use some of the funds to hire an editor and to figure out a way to make that editor self-sustaining.

VTN: I came out of an undergraduate background of activism and ethnic studies in addition to English. And the only reason I went to graduate school was because I was convinced, along with many academic people of my academic generation, that literary and cultural criticism had a political dimension to it. Certainly I was deeply influenced by Marxist traditions and anticolonial national traditions. And part of that was the idea that writers and intellectuals could serve a political purpose and could be organic, or public, figures. All these things are interrelated. They inform my scholarly work and give me a theoretical foundation for trying to figure out how to write fiction in a way that was different from how I perceived most of contemporary American fiction.

And doing the blog and my other work with community arts organizations was part of my sense of obligation that writers and academics need to be working outside the academy, or trying to figure out ways that their writing and scholarship can interact with the world outside literature and academia. Through the blog I was writing for a nonacademic audience out of this conviction that what I thought about in my theoretical thinking could also reach a larger audience. And, conversely, writing for the blog was actually very helpful for me because in writing for nonacademics I could deploy colloquialism and satire and humor that I never dared to use in academic writing.

PK:  What is it about advanced study in the humanities that works its way into your popular writing?

VTN: It goes both ways. It’s not simply a case of translating academic thinking for the public. Writing for a public outside academia also works in reverse to help me shape my academic thinking.

So the first part is my conviction that scholarly and theoretical thinking have insights that are applicable outside academia.  Now if we insist on writing for  a particular guild or profession, then of course the impact of those kinds of thinking is very muted because people generally don’t want to read these kinds of things. We have to make an effort to figure out how to translate.

Doing all that while also writing fiction had an impact on my academic writing too. I wrote a book called Nothing Ever Dies after I wrote The Sympathizer. And the research for Nothing Ever Dies was carried out before The Sympathizer. I’d written a bunch of academic articles for academic journals. But when it came time to write the book, I had a choice between just collecting all those essays and putting an introduction and conclusion on them-and, presto, I’d have a book-or starting from scratch and writing a narrative. I chose the latter. After writing The Sympathizer and writing The Refugees, I just couldn’t go back to conventional academic writing. And I thought, what I’m arguing in this book about war and memory, forgiveness, justice-all these things have wide applicability outside academia, and I just have to find a way to convey that. The choice, though, was not between “sophisticated” academic thinking and “writing for the masses.”  There’s a whole spectrum of difference in between. In this case I chose a writing style that would be criticism for an informed general public, and I wrote the book as a narrative.

VTN: I think that’s a good way of putting it. I started off as a humanist; that’s one of the reasons I became an academic, a graduate student, and a writer. A lot of Nothing Ever Dies was about trying to get over the sentimentality that’s often attached to humanism, at least in the way we as academics pitch it. I coin the term the inhumanities to describe what I do.

I think that undergraduates and graduate students are enthusiastic about all these ideas about trying to reach broader audiences and are willing to be experimental with blogs, digital humanities, and many other kinds of things. And so even if the MLA is going to run into difficulty trying to get tenure reviews to allow for blogs, it is good that PMLA is creating space for things besides academic articles and reviews, for things like excerpts from blogs or profiles of scholars who are doing interesting things-people who have all the credentials of respected scholars but are also doing something else.

PK: You talk in an LA Times article about the “burden of uselessness falling with greater weight” on the arts and humanities, where everybody has to prove that their major is going to lead to a job in finance.

VTN: The work that we do within our own disciplines is not enough. I could write a novel, but, although it may change something, it’s not necessarily going to change the world. You still need social movements to take place. It doesn’t help the academic cause that a lot of academics can’t speak outside academia, and even the ones who want to speak outside academia are ill-practiced at it. People have to be willing to take risks with their careers and with their intellectual and professional progress.

Our work could be more relevant if more people could read us, but if more people could read us, our work could actually be more threatening. It could make things more problematic if people who are already skeptical of the humanities could actually hear the things that are being said. But that could also mobilize more people on our behalf, when they really can understand some of the relevance of scholarly projects. There is potential for the scholarly humanities to actually move people and give them new insights into really important issues.

Part of the problem is that scholars don’t think of themselves as activists. They generally tend to be individuals, and they want to do their own work. If people keep on just doing their own books, they’ll be standing on islands that get smaller and smaller.

The path that I chose was a very difficult one personally and professionally. But outside the question of “reward” the MacArthur or whatever-it’s been fun being able to write for a larger audience, being able to reach people who are not academics. Knowing that my work, that my writing, has been able to move people emotionally (and I’m speaking not just of the fiction but also of Nothing Ever Dies)-that’s enormously rewarding. I would never have continued in academia if I had written my second academic book like my first one. So turning myself into a more public writer has been a lifesaver for me, but it’s also been enormously fun.