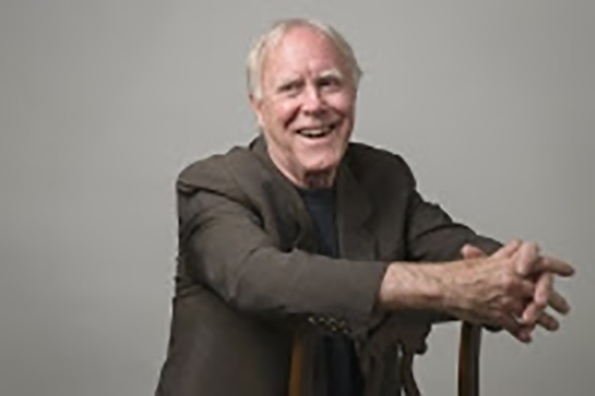 Former U.S. Poet Laureate Robert Hass won the 2018 Truman Capote Award for Literary Criticism in Memory of Newton Arvin for his book, A Little Book on Form: An Exploration into the Formal Imagination of Poetry, released by HarperCollins Publishers in 2017.

The $30,000 award is the largest annual cash prize in English-language literary criticism, and it is administered for the Truman Capote Estate by the Iowa Writers’ Workshop at the University of Iowa.

“It’s immensely gratifying to be given this honor,” says Hass. “You get started on work like this wondering if anybody is going to be interested, and [you] are able to complete it only because you’ve seen or thought you’d seen something useful, some flash of insight that seems urgent to you in the work, but you still have no idea if anyone besides you is going to see it.”

Hass is one of the most celebrated and widely-read voices in contemporary American poetry.  He is recognized for his poetry, literary criticism, and translations of the Nobel prize-winning Polish poet Czeslaw Milosz as well as the work of Japanese haiku masters Bashō, Buson, and Issa.

Time and Materials, Hass’ most recent collection of poetry, published in 2007, won both the National Book Award and the Pulitzer Prize in Poetry in 2008. He served as U.S. Poet Laureate from 1995 to 1997, and he has been a MacArthur Fellow (commonly known as the “Genius Grant”). He is currently on leave from his position as professor at the University of California, Berkeley, and is working on what he hopes is a book of poems.

Hass taught at the Workshop several times, and says it was because of one such visit that he first began work on A Little Book on Form. He was asked to teach a course on form in poetry, but says as he reviewed various books he felt none of them “captured the curious combination of work and play involved in discovering the form of a poem while you are writing it.”

“I also knew I belonged to the last generation of American writers who did not grow up with MFA programs and creative writing classes,” says Hass. “I learned what I learned about the art I wanted to practice by reading, and I read new poets and old poets, translations of old Chinese poets and new Eastern European surrealists. And there was—in the Workshop—this audience of hungry and exceptionally talented young writers, so it was almost entirely a pleasure to figure out how to inflict my own education on them.”

He began with handouts that collected his research into the expressive possibilities of poetic forms. For PowellsBooks.Blog, Hass describes how he invited his Workshop students to present on the forms of other arts and crafts to demonstrate many ways one can sense creative shapes. Students gave presentations on how to waltz, the construction of an apple galette, and the structure of a computer program.

“We were suddenly on the scent,” writes Hass, “tracking down the shapes of a very deep magic.”

After returning to Berkeley, Hass says he continued to explore poetic forms with undergraduate students, and over time those investigations took the shape of a book.

In a New York Times review, Craig Morgan Teicher writes about A Little Book on Form, “Disguised as a reference book, this is actually a friendly tour of one poet’s mind … the book isn’t merely a master class on form. It’s a jump starter for that most necessary of tools for the artist or lover of art, if not for everyone: the sensibility.”

Hass’ poetry and literary criticism describe a sensibility receptive to history, social and ethical concerns, and the interconnectedness of seemingly unrelated forces or events. Its presence is felt in his early work and endures to A Little Book on Form.

“Palo Alto, the Marshes,” a poem from Hass’ first poetry collection, Field Guide, published in 1973, begins with the tactile reality of a Bay Area marsh before drifting into the history of the marsh and the world events it continued to shape.

In an interview with Anna Ross for the magazine Guernica, Hass describes how Palo Alto’s marshes once were the site of a ranch inhabited by the daughter of John Frémont, a man so connected to California history that a city in the Bay Area bears his name, as to do streets all over the state.

In the poem, Frémont’s battles with Native Americans become echoed by the Dow Chemical plant that later stood on those same marshes and produced napalm that was shipped to Vietnam.

“I was thinking that our history doesn’t look at our own violence, the violence in our own past, and we go out and repeat [that violence] someplace else,” says Hass in the interview.

In A Little Book on Form, Hass dissects and analyzes poetic forms from multiple continents and eras, and discusses how poetic forms are connected to other subjects such as math, music, religion, and sexuality. This broad view also appears in his thoughts on poetry itself.

“Anciently, poetry—rhythmic and memorable language—was the first storage system, the first software on the brain’s hard drive,” says Hass, “and it could be about anything that was worth preserving, so it was by definition interdisciplinary. In the last 150 years, the written art of poetry came to be a sort of alternative storage system. Poets undertook to say what wasn’t being said elsewhere. And in that way, it is less interdisciplinary than it is un-disciplinary. It’s the wild lot among the gardens.”

A Little Book on Form was chosen for the Truman Capote Award by an international panel of prominent critics and writers—Terry Castle, Eavan Boland, Michael Wood, Ross Posnock, Elaine Scarry, and Joyce Carol Oates—each of whom nominated two texts. Books of general literary criticism in English published during the last four years are eligible for nomination. After reading all the nominated books, each critic ranked the nominees.

In addition to the administration of the literary criticism award, the Iowa Writers’ Workshop’s involvement with the trust includes awarding Truman Capote creative writing fellowships to UI students.

Newton Arvin, in whose memory the award was established, was one of the critics Capote admired. However, Arvin’s academic career at Smith College in Northampton, Massachusetts, was destroyed in the late 1940s when his homosexuality was exposed.

“There is the generous and poignant impulse of Truman Capote to honor his friend Newton Arvin,” says Hass, “a gifted critic and exceptionally graceful and quietly exacting writer, who was treated shamefully by the culture of the United States in the middle years of the century when gay men and women lived mostly in a kind of hiding. I’m very much aware that this award is intended to honor him and right a wrong.”

The creation of the Truman Capote Literary Trust was stipulated in the author’s will, and the Annual Truman Capote Award for Literary Criticism in Memory of Newton Arvin reflects Capote’s frequently expressed concern for the health of literary criticism in the English language. The awards are designed to reward and encourage excellence in the field.

The Iowa Writers’ Workshop is a graduate program in the UI College of Liberal Arts and Sciences and the Graduate College.

PAST WINNERS OF THE CAPOTE AWARD: