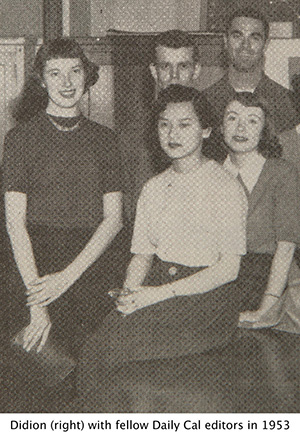 Joan Didion, a writer who first garnered great attention and praise for her literary essays about American subcultures of the 1960s, is one of many acclaimed authors to have started their careers at Berkeley. Sprinkled among fashion articles and makeup advertisements, much of Didion’s early writing originally appeared on the pages of the “women’s magazines” of her times. Her writing was unusually reflective and incisive, speaking to many women across the country who did not feel that the mass media took them seriously. In the late fifties and early sixties, women or minorities rarely had platforms to represent themselves complexly. As her popularity and acclaim increased throughout the ‘60s, Didion often found herself straddling the line between being an insider, writing for some of the most prominent women’s magazines, and an outsider, writing about subject matter that was not frequently found among fashion and advice articles.

A trailblazer in undefined, or perhaps wrongly defined, territory, Didion likely became comfortable with this idea of self-definition and affirmation against a backdrop of ambiguity during her time at Berkeley. Reflecting on her time at Berkeley in a 1960 Mademoiselle article entitled “Berkeley’s Giant: The University of California,” she remarks on the immense resources and cleverness of both students and faculty at the university, but also their lack of clearly defined identity. She describes the university as “big, rich and, like its students, peculiarly undefined, oddly amoral.” Her concluding thoughts in the article are telling: “Lost souls will not find themselves in those eucalyptus groves of academe. For Berkeley is a great place only for students capable of self definition. It is a place of great riches, but it gives them up readily only to people of great expectations.” Didion was one of these students capable of self-definition. She helped to usher in the popularity of literary nonfiction, becoming one of the most innovative and prolific writers to document and comment on cultural phenomena in the 1960s. Her work, eventually collected into best-selling collections, may first have appeared on the pages of magazines that were read mainly by women, but her audience was by no means limited to women. Her writings appeared at a time when women, whose professional roles had declined throughout the late nineteen-forties and fifties, were just beginning to bolster and leverage their cultural power.

Didion’s unique voice resonated with the times during which she obtained her education and entered the workforce. An undergraduate in the 1950s, Didion studied English at Berkeley from the spring of 1953 until 1956. She attended college during a time of immense change in both the United States and at Berkeley. Berkeley’s enrollment was climbing rapidly in the post-WWII period. During the war, women had made up the majority of the student body, but after the boys came home and the federal government provided scholarships for returning veterans, women became a much smaller proportion of the students, sinking to lows not seen since the 1930s. Nevertheless, the campus was crowded: 11,000 undergraduates attending Didion’s freshman year. Female students were outnumbered two to one by male students. The faculty at the university was growing and changing as well, but seemingly at a slower rate than the student population. While more female students were enrolling in institutions of higher education, faculty and professor positions were still dominated by men. At the time Didion attended Berkeley, there was a single female English professor, the great Josephine Miles.

In many ways, the campus was evolving in the fifties to become what Berkeley students know it as now; graduate students were increasing; there were more large lecture courses than earlier; and scientific research was taking off. However, there were also many aspects of student life that would be unrecognizable to students now. By the time Didion arrived on campus, university residence halls barely existed and could house only a few hundred students, not nearly enough to accommodate the majority of the campus population. Even fewer of these spots were available for women, as Stern Hall, which opened in 1942, was the only university sponsored residence option for women.

Given the limited options for housing, most students lived in boarding houses or, like Didion, joined Greek life. Didion became a Berkeley Tri-Delta upon arriving on campus, moving into the house soon after. However, Didion often remarked in her early writings that she did not share many of the same aspirations as her sisters, since many of them attended college in the hopes of finding a husband and retiring their academic or professional ambitions. This was not a sentiment Didion shared, and in addition to committing most of her extracurricular time to writing for and editing special editions of The Daily Californian and The Occident, she did not return to sorority life after her sophomore year.

These student publications, such as The Daily Californian, were some of the first instances in which Didion was able to demonstrate her writing and editorial prowess. In the spring of 1953, Didion co-edited, with longtime friend Peggy LaViolette, a special fashion issue of The Daily Californian. While optimistically subtitled “It’s a Woman’s World,” the edition largely appeals to the narrowly defined understanding of what it means to be a woman that was prevalent in the ‘50s. Dominated by fashion and makeup supplements, the edition closes with an unattributed piece that serves as a contrast to much of the rest of the paper in tone. The article discusses the leadership role women play at the university, particularly in the ASUC, where they took the lead on many student issues. The author discusses the tension between women having leadership roles at university and their more limited prospects after graduation. While Didion may not have written this article, this edition strikingly reflects the work that she would go on to do in her career. The more serious, inquisitive tone of this piece that causes readers to reflect on the unfair dichotomies imposed on women’s lives, in contrast to the stereotypical portraits of women standing mutely next to the articles for sale in the advertisements, as if they were literally for sale themselves, is the kind of work that Didion would produce.

A self-described “poor student”, Didion enjoyed, but always had ambitions beyond academia. Berkeley, while a place that informed many of her sensibilities as a writer, was not where she sought to remain after graduation. Having been chosen to be a guest editor at the women’s lifestyle magazine, Mademoiselle, the summer of her junior year in 1955, Didion realized she wanted to be a part of the New York editorial world. These aspirations led her to apply to the Prix de Paris competition, a Vogue sponsored writing contest that awarded the winner a job in the magazine’s New York or Paris office. Didion won the competition in 1956 and subsequently moved to New York after graduating from Berkeley to become a research assistant at Vogue. Thus it was that she vaulted directly from her Berkeley undergraduate life to that of a New York writer, making her name during the late ‘50s and early ‘60s primarily as a contributor to the popular but stylish women’s magazines Vogue and Mademoiselle.

Foreshadowed by her work as a student at Berkeley, Didion’s later career became a force for women in popular media. Her writing helped to legitimize the realm of “women’s writing” by showing a distinct and nuanced perspective on the pages of popular magazines. Her ability to self-define amid the caricatured portraits of women and against a backdrop of doubt, which she likely learned at Berkeley, helped her develop a unique voice and a distinctively perceptive viewpoint. Her stylistic and intellectual strengths were singular, but they allowed Didion to pave the way for many other female journalists and writers.