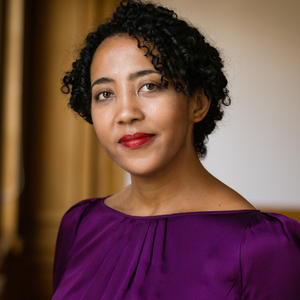 By Lucia Salazar and Francesca Hodges

Professor Namwali Serpell’s debut novel, The Old Drift (2019), demonstrates her prowess as a fiction writer. It was an immediate success: a New York Times bestseller and recipient of the Windham-Campbell Prize for fiction. The Old Drift discloses Serpell’s Zambian-American perspective and the multiplicity of her environments. “It is about Zambia”, she told us, “and the writing that I do continues to be both American and Zambian, rather than Zambian-American”.

Serpell is the product of a Zambian heritage and an American education, moving from Zambia to Baltimore at the age of nine. She pursued an undergraduate degree in literature at Yale University before turning towards a PhD in American and British Fiction at Harvard University. She joined the Berkeley English Department in 2008, and has since taught classes both traditional and of her own design. Berkeley has provided Serpell with a drastically different domain from the east coast schools where she trained, as she reflects.

“Berkeley is rough and tumble, and political and scrappy. I think that the students are brilliant and curious and eager to learn and grateful for knowledge.” At Yale and Harvard, where she taught as a graduate student, “the students are less open about what they don’t know. And therefore are less likely to learn new things”. “I have discovered a lot of energy around learning here, and a lot of openness to difference. So, here there’s an understanding that there are different learning styles, and different people’s experiences bring something to the classroom. There isn’t an attempt to corral all of that variety into a single, perfect student. Instead, there’s an expansion of what it means to be a student.”

Serpell finds that the unusual freedom of students’ academic endeavors is partnered with the freedom the English Department gives her to design her own courses, which she describes as “immensely useful”.  The position was originally advertised for a specialist in 20th-Century literature, she explains, “but I think only one of my classes fits that description. And being allowed to teach, for example, the course on the novel since 2000” is extremely unusual. “There aren’t many institutions that teach courses on novels that contemporary,” Serpell said. Such courses keep Serpell’s literary-critical courses close to her interests as a creative writer.

Two developments in the English Department since her arrival in 2008 have been striking to Serpell: the inclusion of more creative writing courses and a greater diversity in the teaching staff. “We’ve hired a lot of young faculty: many of color, many female, many queer, and that has diversified the department which has been great,” Serpell said. “I think there’s also been more of an attempt to theorize and capitalize on the fact that the faculty does both critical and creative work. We’ve done searches for fiction writers, like Fiona McFarlane, who is also a critic. We’ve brought in different speakers who work in both, and Berkeley Connect is a place where people can talk about the creative and critical writing they do. I think it’s not that we weren’t both critics and creative writers before, but now the department has a self-understanding that this is its strength.” Through the English Department’s negotiation between the critical and the creative, faculty like Serpell successfully find their footing, straddling between two interests.

While The Old Drift brought Serpell deserved praise, her repertoire does not start and end with her debut novel. Her work appears often in The New York Times, the Los Angeles Times, and Freeman’s. Indeed, a 2019 short story, “Take It”, trenchantly satirizes the lack of socioeconomic self-awareness often found in Berkeley, where the comfortable millionaires in the hills live only blocks away from the homeless in People’s Park. Her short story centers on a young boy who gets invited to a naked party. The boy, from a less privileged background than the bohemian Berkeley attendees, decides to steal their carelessly discarded belongings and run.

The genesis of the story, Serpell explains, was an incident from her student days at Yale: “We threw a naked party and kids from the neighborhood were invited in, by some irresponsible undergraduates. They were thirteen- or fourteen-year old kids, and they stole people’s stuff. I was thinking, ‘Good for them.’” Serpell said, “I’d always wanted to write that story. And living on the border between Berkeley and Oakland for the first three years that I was working here, close to the Ashby BART station, I felt a very similar town-and-gown tension between the college town Berkeley and Oakland that I’d found between Yale and the surrounding city of New Haven”.

But why, we wondered, transplant the story to Berkeley?  “It’s hard to explain why certain things about a place seep into your imagination, but I felt compelled to try to explain this class dynamic, this race dynamic, and I felt like I wanted to set it in a place where I could observe it happening now, rather than back in the 90s when it happened to me on the East Coast,” Serpell said. She wanted to explore being between incompatible places: “I wanted to capture that specific feeling you have when you can just walk a block and be in a different world altogether. I wanted to explore how it feels to negotiate those worlds”.

Serpell’s time in Berkeley-Oakland has given her a new and different relation to America in both art and life. To illustrate the latter, Serpell shared her story of becoming a citizen. “I became a US citizen a few years ago, shortly after the election, in 2017, and took my oath in Oakland at the Paramount, the big movie theatre there. I think that sense of becoming an American in the context of a Californian immigration world is very different from what it would have been had I become a citizen on the East Coast,” Serpell said. “It was huge with people from everywhere. Oakland is a space that has always had this kind of embrace of multiplicities, so I was really happy to do it there.”

However, she also clarified her surprising reason for becoming an American citizen—a reason that speaks to the bubbling political tension in the United States. “I became a citizen not to vote, but to protest, which is again telling. Protests, because of the first travel bans in SFO, which is federal property so if you get arrested on federal property you can get departed,” Serpell said. “Hence, the fact that I couldn’t go to SFO to protest against the unconscionable actions of this government, which I’ve been paying taxes to since I became an adult, was just too infuriating for me.” And so her desire to participate in a protest inspired her embrace of American citizenship.

The paradox of becoming an insider in order to stay an outsider recurs in Serpell’s work, as she repeatedly explores and celebrates the role of the “alien”. Her upcoming non-fiction book, Stranger Faces, takes the topic into the realm of visual culture. She investigates the aesthetic effects of the “alien” face—or the faces of those who don’t fit into the confines Western beauty. “One of the risks I take is considering a nonnormative face as a work of art, by thinking about the pleasures of what we normally call “the monstrous” or “the different” or the grotesque, but actually seeing it as sculptural—something we know we can appreciate in art. To do it to a person feels like a taboo, but I actually think people do that with everybody, and people often do it to themselves, and the connection is empowering. It’s hard to really take our kind of ethical stance on this as far as this, but body modification, that desire to turn your body into a work of art, I think should be respected and admired, rather than denigrated as a grotesque thing.”

Serpell differentiates between aesthetically connecting with the alien and “exoticizing otherness”, where questions of the aesthetic and ethical intertwine. She explains, “The problematic implication of exoticizing or making someone into an object of art is that the objectification will somehow lead to their oppression, or their negation. It’s slighting their personhood, but I actually think it’s the imbalance of who gets exoticized and who doesn’t, rather the act of exoticizing itself, that is problematic”, she explained.

In an interview with PBS, she indicated how she raises these themes in her classrooms: “All of the great literature of the US is told through the story of the outsider… being an alien is the condition of being American.” Serpell has taught American classics like The Wizard of Oz, The Joy Luck Club, and The Color Purple—only to name a few. She is currently teaching a “Writing and Technology” course that explores Data Science and Computer Science through a science fiction lens and technical, non-fiction books. She was particularly excited about her Black Science Fiction Course, a genre that she wants to make known. “I’m sort of curating things that I think every student should read, whether those are the classics or things they’ve never heard of. I want students to be able to engage with these works of literature with an understanding of how their form affects their experience. That sounds very broad, but that’s the difference between a book club and a course: it’s not just about what happens, it’s about how it’s told.”

Stranger Faces, is set to be released in September of 2020. The majority of her work can be found on her website.