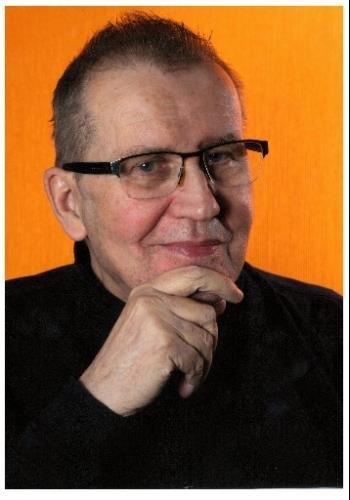 Headnote by Professor Eric Falci, followed by a tribute written by Mitch Breitwieser and Eric Falci upon John’s retirement in 2011. Former students and colleagues have organized a virtual celebration to be held on June 16th, 2020. Details and Zoom link included below, and on our Events page.

John Bishop, a faculty member of the Berkeley English department from 1979 until his retirement in 2011, passed away on May 15th, 2020 in Syracuse, New York.  His obituary appears here.  John was one of the world’s preeminent James Joyce scholars, and Joyce’s Book of the Dark, his 1986 book on Finnegans Wake – in all likelihood the most difficult and complex novel ever written in English – remains an indispensable text.  John was also a beloved teacher to undergraduates and mentor to graduate students, and as luck (and the Internet Archive) would have it, his lectures from a 2008 course on modern literature are available to listen to, as is an interview John gave in 2009.  After a stroke in 2010, John retired from teaching and spent the final decade of his life in Syracuse nearby his sisters Jeanne and Anne, and not far from his hometown of Auburn.  During those years, John continued to read Joyce, Beckett, and other favorite writers, and he gave several guest lectures at conferences and local colleges.  His unparalleled knowledge of Joyce never diminished and he never gave up on the idea that he would, one day, return to teach in the Berkeley English department.

Below is the tribute that Mitch Breitwieser and Eric Falci wrote upon John’s retirement.  Several of John’s former graduate students are organizing a (virtual) celebration of his life sometime this summer.  Please check the English department website in the next few weeks for further details.

We will miss you John.

We pass through grass behush the bush to. Whish! A gull. Gulls. Far calls. Coming, far! End here. Us then. Finn, again! Take. Bussoftlhee, mememormee! Till thousendsthee. Lps. The keys to. Given! A way a lone a last a loved a long the

A Tribute to John Bishop

– by Mitchell Breitwieser and Eric Falci

In the international community of literary scholars, John Bishop is widely regarded as one of the very few most learned, astute, and creative among those who write about James Joyce. His book, Joyce’s Book of the Dark (1986), is an influential and much-beloved examination of Joyce’s notoriously challenging novel Finnegans Wake.  By showing that the famous obscurity and impenetrability of the Wake’s ceaselessly punning and densely multilingual prose is not meant to simply baffle or frustrate readers, but rather is essential for a book that explores the “noughttime” realm of evening, sleep, and dream, Bishop freed a generation of readers and scholars to take the Wake at once more seriously and more playfully.  Elucidating the surface-level complexities of Joyce’s palimpsestic sentences as well as the conceptual systems and texts that galvanized Joyce’s “NIGHTLETTER”  – among them The Egyptian Book of the Dead, Vico’s The New Science, and Freud’s The Interpretation of Dreams – Bishop’s capacious reading clarified the Wake by taking seriously its “clearobscure,” “Sheeroskouro” method.  He demonstrated that a book so polyvalent as the Wake requires an equally open reading practice if we are to register fully both the monumental significance of Joyce’s masterwork and the great pleasure of its “blotch and void” pages. Over the course of his career, Bishop’s ability to demonstrate what it means to read Joyce led to many invitations to speak at many quite prestigious conferences and institutions in Europe and North America, invitations prompted by a widespread hope that his fire might be caught by listening, and it often was, to judge by his reputation.

He was equally successful in the classroom, where his task was the same as the one he set for himself in his book: rather than transmitting to his students his own monumental erudition and insight, Bishop was primarily concerned that his students themselves become adept readers of the books that he put before them. His presentation of what he knew and what he’d thought was aimed at provoking students to embark on literary voyages such as his own by demonstrating that doing so was a possible and deeply enticing option for them. Whether in his legendary Joyce seminars, his other seminars on literary modernism, his lectures on contemporary literature, or his lectures in his introductory survey class, Bishop led his students to discover unsuspected intellectual potentialities in themselves, and earned their sincere and strong gratitude in response. It should be noted that as a consequence of Professor Bishop’s teaching quite a number of Berkeley students became intelligently conversant with literary works that continued to baffle his faculty colleagues, many of whom left Professor Bishop’s Charles Mills Gayley Lecture in 2005 wishing that they too could have listened to him for a semester or two, rather than only for an evening in the early spring.

John Bishop retired from the university at the end of 2010, following a stroke. He continues to undergo therapy in central New York State, near his family. Fellow Joyce scholar Margot Norris, Chancellor’s Professor of English and Comparative Literature at UC Irvine, recently reported to the department that Bishop still loves Joyce, and has been reading Ulysses with a colleague, Michael Davis (Le Moyne University). She added that “he has also never lost his love of teaching, and is therefore excited to have the opportunity to teach six one-hour sessions on Joyce with Professor Davis in November 2011. This shows how the passion for literature and for learning can not only survive extreme medical emergencies and conditions, but also contribute substantially to recovery. As Joyceans go, John Bishop is a real hero!” We agree.