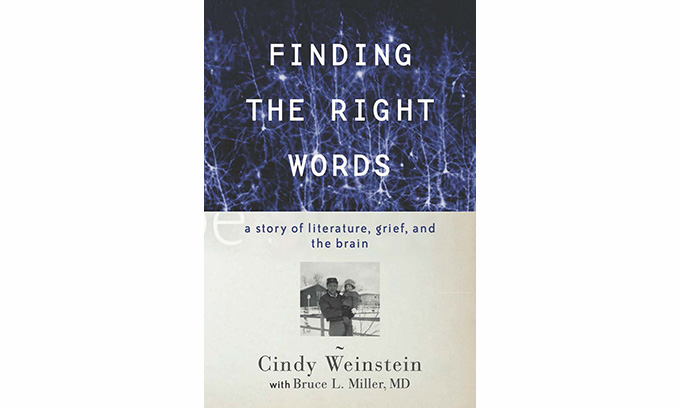 In Finding the Right Words: A Story of Literature, Grief, and the Brain, Cindy Weinstein (PhD ’89) reflects on her time as a PhD student in the Berkeley English department, which coincided with her father’s struggle with dementia. Her father was only 58; the first symptom was his difficulty to find words —an especially charged issue for Weinstein because of her budding career as a literary scholar.

In this excerpt from the preface to her book, written with Dr. Bruce Miller, Weinstein explains how the combination of literature and neurology gave her the language she needed to confront her father’s Alzheimer’s and her own deferred mourning. Weinstein is currently the Eli and Edythe Broad Professor of English at Caltech.

The Jewish tradition of sitting shiva involves people coming to the house for several days, bringing lots of unhealthy but delicious food, and sharing memories of the person who died. When my father died at the age of seventy, having lost his memories, and much more, well before then, we sat shiva. But it was all wrong. Telling happy stories about Dad before Alzheimer’s disease struck seemed impossible, because our lives, his life, had become defined by his illness. Perhaps that is all the more reason to recall the good things. But collectively, we couldn’t do it. The rabbi told an uninspiring allegory about dying and memory. I distinctly remember him taking a glass of water and pouring sugar into it, which then dissolved. We were the water. Dad was the sugar. Something like that, but I had already checked out, thinking that reading the beat poet Alan Ginsberg’s “Kaddish,” a poem about grieving for his dead mother, would have been more relevant. Maybe I should have listened to the rabbi more carefully. Or maybe I should have spent time with my children, Sarah and Sam, who at that time were one and three, and watched The Lion King on a continuous loop during those days Dad was dying and then while we were sitting shiva. I remember hearing the song “The Circle of Life” more than a few times and shrinking from the analogy between my experience and Simba’s.

During those days of distorted mourning, my mother decided that she needed to sell the house that she and Dad had lived in. She couldn’t bear staying in a place defined by pain and wanted to get out right away. And I mean right away. In between thanking people for bringing over platters of corned beef and cinnamon walnut rugelach, washing dishes, and pretending everything was okay, we were getting the house ready to put on the market. My mom would sell the house shortly after that and then move several times over in the course of the next several years. She couldn’t find a place for herself. That she ended up with my family in California for her final years makes me extraordinarily happy. I couldn’t, I didn’t take care of my father, but I was able to take care of her. When she died, I held her in my arms. How I wish I had done that when my father was dying.

Usually, a family like mine sits shiva for a few days, attending Friday night services to say kaddish, to say goodbye. Because I didn’t get it right the first time, I needed a do-over. And because so many years have passed between his illness, his death, and my readiness to acknowledge what transpired over all of that time, I have needed to sit shiva for a year (which is actually what very religious Jews do). This is a long time, I know, but if you put something off for more than three decades, repairing the damages caused by delay can take a while. I’m like a flat tire that’s been sitting in the shop waiting for the mechanic to fix it. I’m finally patched.

Because I think in terms of literature, Herman Melville’s Bartleby is the character who comes closest to capturing what my state of mind has been for all of these years. Published in 1853, “Bartleby, the Scrivener” tells the story of a worker whose job is to copy the legal documents his boss, the lawyer of the firm and the narrator of the story, asks him to. Initially, he is an ideal employee and then, out of the blue, starts refusing to do the work assigned to him by his boss.

In a sentence as famous as the opening of Moby-Dick’s “Call me Ishmael,” Bartleby replies to his boss’s requests with, “I would prefer not to.” This preference, which is not an outright “no” but functions that way, drives the narrator to distraction. The story has some funny moments, such as when the narrator desperately suggests that Bartleby use his nonexistent conversational skills to become a traveling salesman, or when the narrator gets so frustrated with Bartleby’s immobility (after having worked at a seemingly inhuman pace, Bartleby not only refuses to work but also refuses to leave the workplace) that the narrator moves into different law offices. The story also has some devastating moments. Bartleby becomes ghostlike as the story progresses. His body becomes an empty shell housing a lost soul who refuses all connection with the outside world until finally, the outside world takes him to prison for unlawfully occupying a space that is not his. At the end of the story, he dies facing a wall.

Like Bartleby, I had very strong preferences, the most important being that I would prefer not to see my father disappear before my very eyes. Therefore, I closed them, figuratively speaking. The other very important preference was that I wanted to read. Therefore, I opened them, literally speaking. Looking back, I see that a small part of my brain was open too, open to the possibility of getting glimpses of what was happening to my father without having to reckon with it directly. The two preferences came together in the following way: literature became a kind of crack—a window slightly open, a door slightly ajar—through which my father’s disease squeezed through. Sort of open and sort of closed. Simultaneously. That he would have preferred that I not give up my dream of reading and writing for a living did not make my decision to stick with it, all those years ago, any easier. I knew he wanted me to continue with my life, and not sacrifice it, even when he was directionless, speechless, and drugged-out in the nursing home.

But memories of my father—the catatonic one and the beautifully aware one—have been knocking at the door for a long while now, and I have known that I owe him a book. His love and selflessness made it possible for me to do what I love (read and write), and now I must return the gift. Obviously, I cannot give it to him, but I can give it to myself and anyone who chooses to read it. He would have wanted his experience to be recorded so that it could help others. Oddly, this has been the easy part: knowing that I had to write a book about him. It was a matter of finding the time and the right time.

With each academic book I have written, there has been this in-between time when I have thought, “Now I’ll write the book about my dad.” But for better or worse, I would have an idea about American literature that would prevent me (or I would allow myself to be prevented) from writing this more personal book.

My most recent monograph on American literature included the subtitle, When Is Now? Well, now is when I would no longer prefer to not look at my father’s Alzheimer’s. Let me put that awkward sentence, with its double negative, more positively: I would prefer to understand my father’s dementia and my relation to it now. Why? Because now (at fifty-eight) is when I found out my father (at fifty-eight) was sick. Because now I can write this book about my father, for my father, with Bruce, who this year will be turning seventy, the same age as my father when he died. My memory is good; my grammar intact; my wordfinding ability unimpaired. This may not always be the case.

As anyone who has lost someone knows, the end of official grieving doesn’t mean the end of grieving. That said, my year of sitting shiva—in Berkeley reading books, at UCSF studying neurology—has given me the chance to get it right. I can now remember my father without wanting to dissolve, and I have even retrieved some very happy and funny memories along the way. They are no longer fossilized. They have come alive in a series of chapters about diagnosis, language, spatial disorientation, behavior, and memory. While Bruce explains the neurology behind the clinical presentations I describe, he also reflects upon his career as a doctor and the values that have driven his commitment to understanding dementia and listening to families. This has helped me immensely, and I believe it will help others. Having remembered my father, having kept my word that he is safe in the pages of this book, I can at last say goodbye to him.

The preceding is an excerpt from Finding the Right Words: A Story of Literature, Grief, and the Brain, published by Johns Hopkins University Press. Copyright 2021. Used with permission.