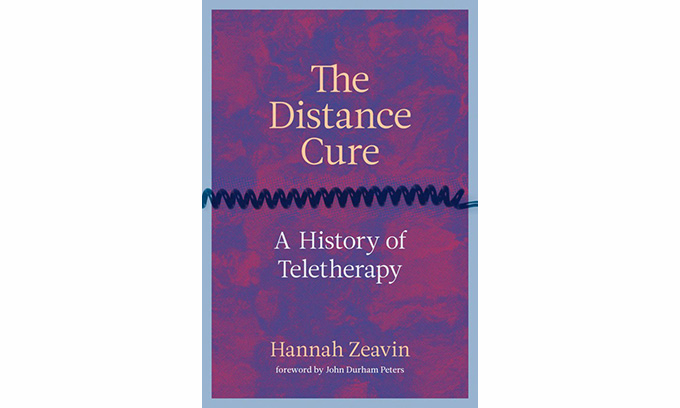 In The Distance Cure: A History of Teletherapy (MIT Press, 2021), English Department Lecturer Hannah Zeavin offers a history of psychotherapy across distance and time, from Freud’s treatments by mail to crisis hotlines, radio call-ins, chatbots, and Zoom sessions. While therapy has long understood itself as taking place in a room, with two (or more) people engaged in person-to-person conversation, psychotherapy has long operated through multiple communication technologies and media. These have included advice columns, radio broadcasts, crisis hotlines, video, personal computers, and mobile phones; the therapists (broadly defined) can be professional or untrained, strangers or chatbots.

In this excerpt from her book’s introduction, Zeavin proposes a reconfiguration of the traditional therapeutic dyad of therapist and patient as a triad: therapist, patient, and communication technology.

In the twenty-four-hour period after Donald Trump was elected to the presidency in 2016, the San Francisco-based hotline Trans Life reported that it received its most calls ever in a day; the National Suicide Prevention Lifeline received more than double the calls it normally does in the hours after the election results were announced. After Hurricane Maria, calls spiked to Puerto Rico’s sole suicide hotline and the service remained in high demand long after. In the wake of COVID-19, new hotline services have debuted with astounding speed to provide mental health care to nurses and other emergency, essential workers.

In a moment of personal and national crisis, people seeking help still turn to a form of teletherapy pioneered in the 1950s: the suicide hotline. Even in daily moments of media consumption—the reading of articles or watching of television shows that deal with suicide—media now refer their consumers to hotlines. How has picking up the phone and speaking or typing to a trained, nonprofessional stranger come to seem like a favorable way to seek help and a crucial service to offer?

Therapy has long understood itself as necessarily taking place in a room, with two (and sometimes more) people engaged in in-person conversation. What kind of productive communication happens when a patient and therapist aren’t in the room together for fifty minutes at a time weekly, let alone four, five, or even six times a week (as was instructed by Freud)? Can a once-a-week, or once-a-month, or on-demand treatment suffice? Can it help a person to be in therapy when that therapy is conducted by letter, over the radio, the telephone, the personal computer, or an app on a cellphone, either anonymously or not, with a person or with an algorithm? In short, yes. These forms of networked, broadcast, tele- and computational therapies may not accomplish what long-term embodied psychotherapeutic or cognitive behavioral therapies do or aim to provide; they are understood to be different than traditional ongoing, in-person therapies.

It isn’t easy to find conventional therapeutic help or even tele-forms in the moment of need, let alone make use of that help. Beyond the barriers that exist to finding a therapist and being in therapy, communicating itself is a difficult task—John Durham Peters calls this paradox the “dualism of communication—at once a bridge and a chasm.” The work of therapy is to make communicating possible enough for long enough that the “magic” of talk therapy can do its work, the bridge momentarily spanning the chasm. More specifically, psychotherapy offers both a model of mind and a communicative practice that understands that communication is at once the goal and the cure, yet also often nearly impossible.

This is a book about the history of these helping relationships and the forms of communication on which they depend: with a human known to us, a stranger, a person we know only by voice, and with ourselves. It’s about how we generate, maintain, and practice those relationships across time and across distance. It is about the transformations of human (and human/nonhuman) intimacy in the long twentieth century. To study these kinds of relationships accurately, I have had to reconceive them: they are not dyads but triads, composed of patients, therapists (broadly defined), and communication technology—the means by which they connect (and disconnect). Mental health and care delivery thus form an aperture onto communication as such: how we do it, when, where, over what medium, and how that affects us, makes us anxious, rewards us, allows us to “talk” with others we otherwise wouldn’t, in ways that otherwise might not be available. The actors transmitting and receiving the “talk” are those in need of help and the mental health care workers who “listen,” the psychotherapists, social workers, clergy, volunteers, phones, and computers that help them.

The Distance Cure is structured as a study in a single genre of communication: therapies performed via various kinds of distance, including mediated, tele-, and automated therapies. Although there is a millennia-long Western tradition of speech as cure—from Socrates’ idea that the cure of the soul is “fair words,” and Aristotle’s notion of catharsis in Poetics, to the ongoing use of the Catholic confessional—this study begins in 1890, when psychoanalysis becomes codified as a formal, institutional discipline. As the book moves into the twentieth century, distance therapy is conducted under the sign of many subgenres and theories of practice including psychoanalytic, psychodynamic, and cognitive behavioral therapy (CBT), as well as lay forms of help and care such as pastoral counseling, peer-to-peer help, self-help, and self-improvement. All these different forms of mental health care have at least one thing in common: the belief that some kind of communication helps if not cures, regardless of its medium.

Despite the word cure being in its title, this book doesn’t assess teletherapy’s general curative function nor does it make direct recommendations for clinicians about how to practice teletherapy. Instead, The Distance Cure focuses on the helping interaction itself: whether patients seek it, how they seek it, how they are and are not helped, and what may be able to help them. And at what cost? As the function of the clinician declines and the serial, weekly face-to-face appointment gives way to broadcast models, volunteer labor, peer-to-peer aid, and self-tracking therapies, access to treatments that were historically prohibitively expensive for the many becomes more thinkable. Parallel to this, free therapies decrease, as patients become understood as clients and then as customers. Often, teletherapy projects prioritize “help” being made more easily available via the tele-delivery of therapy over attention to how much help is on offer, what that help is, who provides it, what it instructs, and for whom it actually feels usable.

The Distance Cure shows that teletherapy, far from being a recent invention, is at least as old as psychoanalysis itself. Beginning in the 1890s with a reading of Freud’s treatments by mail and his moment’s epistolary conventions, I offer a new history of the conventional therapeutic scenario, one that cannot be told in isolation from its shadow form, teletherapy. Subsequent chapters demonstrate that psychotherapy has always operated through multiple communication technologies and media, including advice columns, radio broadcasts, crisis hotlines, the earliest mainframe networks, home computing, the Internet, and mobile phones. To protect the supposed “purity” of the dyadic model of therapy, practitioners since Freud have almost completely resisted reflecting on these channels; my aim has been to do just the opposite. This study restores to the therapeutic past a history of the discipline’s robust real and metaphorical use of communication technology.

Excerpted from The Distance Cure: A History of Teletherapy, published by MIT Press. Copyright 2021. Used with permission.