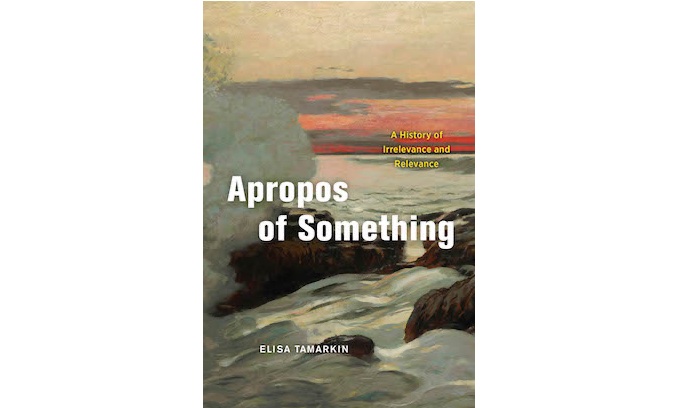 Professor Elisa Tamarkin’s Apropos of Something: A History of Irrelevance and Relevance (University of Chicago Press, 2022) is released this month.

Before 1800 nothing was irrelevant. So argues Elisa Tamarkin’s sweeping meditation on a key shift in consciousness: the arrival of relevance as the means to grasp how something that was once disregarded, unvalued, or lost to us becomes interesting and important. When so much makes claims to our attention every day, how do we decide what is most valuable right now?

Relevance, Tamarkin shows, was an Anglo-American concept, derived from a word meaning “to raise or to lift up again,” and also “to give relief.” It engaged major intellectual figures, including Ralph Waldo Emerson and pragmatists and philosophers—William James, Alain Locke, John Dewey, and Alfred North Whitehead—as well as a range of critics, phenomenologists, linguists, and sociologists. Relevance is a struggle for recognition, especially in the worlds of literature, art, and criticism. Poems and paintings in the nineteenth century could now be seen as pragmatic works that make relevance and make interest—that reveal versions of events that feel apropos of our lives the moment we turn to them.

Vividly illustrated with paintings by Winslow Homer, Henry Ossawa Tanner, and others, Apropos of Something is a searching philosophical and poetic study of relevance—a concept calling for shifts in both attention and perceptions of importance with enormous social stakes.  It remains an invitation for the humanities and for all of us who feel tasked every day with finding the point.