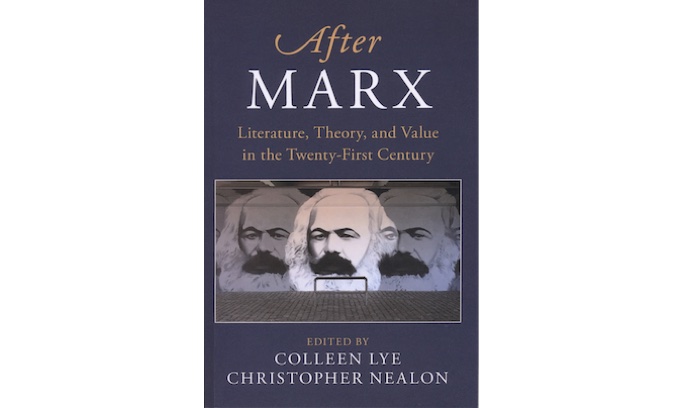 An interview with Colleen Lye, co-editor of After Marx

Here Lindsay Choi — English graduate student and co-coordinator of the Interdisciplinary Marxist Working Group at Cal — interviews Professor Colleen Lye about After Marx: Literature, Theory, and Value in the Twenty-First Century (Cambridge University Press, 2022), a collection of essays which she co-edited with Christopher Nealon. In the resulting interview, which follows below, Choi and Lye discuss a number of topics related to the volume, from its origins and its stakes to the value of sociality to academic work.

I want to start by asking about the relationship between this book and the conference it’s “after”—the After Post-Marxism Conference in 2019. Firstly, there’s the pragmatic matter of how the conference came together, and the book’s relationship to this process. I’m also curious about how the organization of these different mediums of academic engagement shift, rearticulate, or illuminate relationships between the different pieces in the anthology. So perhaps the question is one of both form and process.

After Marx is very much a Berkeley book and specifically a book born of collaboration at Berkeley. The Interdisciplinary Marxism Working Group (IMWG) was instrumental in helping organize the conference. The conceit for the book predated the conference. But I owe my growing interest in Marxist theory over the past twenty years to IMWG, which first got going in 1999. When Cambridge approached me to edit this book, I immediately thought of doing it with Chris Nealon, whom I first met at Berkeley when we started teaching here as newly minted PhDs around the same time. A probably too-large number of the contributors to the volume have some Berkeley connection whom Chris and I first encountered through our graduate teaching here. So it made sense that, in trying to achieve as coherent as possible a collection of essays about the current state of Marxist literary criticism, we wanted the contributors to float their ideas before a Berkeley audience (which, by the way, was incredible). Gathering at Berkeley also allowed the contributors to hear each other’s papers and to rewrite them for publication with the others in mind. After Marx is not just a Berkeley book and a collaborative project; it’s a book that’s really a product of the dynamism of our graduate community at Berkeley.

The conference had been organized into three groupings—After Modernity, After Ideology, After Formalism—that fell away in the volume itself. Why? What of this framing remained, if implicitly, in the ordering of the essays or in the introduction you and Chris Nealon provide?

Yes, in some ways it took the conference to get us to realize that those rubrics were themselves a reflection of the antinomies of the 1960s’ version of Marxist literary theory and were not really the right way of posing the question(s) of Marxist literary theory today. What did remain a constant between the conference and the volume is that the volume is very much motivated by the sense that the post-2008 return to Marx marks the end of a period known as postmarxism, when radical theory had taken the rejection of “orthodox Marxism” to be its point of departure. Today, there is much more interest in the reassessment of Marxist theories and the recovery of left movement histories, and this undoubtedly has to do with the sense that we must find an alternative to capitalism. So, though the volume is called “After Marx,” it’s specifically about how our post-2008 return to Marx is different from the 1960s’ return to Marx which saw itself as postmarxist. The volume really should be titled “After Post-Marxism,” but its title had to fit within the protocols of the Cambridge series within which it appears.

About the current state of Marxist literary theory, I’m interested to hear what you think “literature” or the “literary” refers to in the volume. Also, “Literature” is used as a term expansive enough to include film and theater. I’m also interested in how various different chapters’ approaches to literary criticism are—some practice close reading, while others historicize its obsolescence. Still other chapters analyze the effect of certain tropes in Marxist theory, applying what we might call literary critical approach to theoretical discourse, as a starting place for making a conceptual intervention into Marxist theory. To put it shortly—what do you make of the internal heterogeneity of the volume with regard to literary criticism? What is the import of the literary to Marxist thought?

It’s certainly the case that there’s no uniform literary critical method advocated or practiced by the contributors to this volume. That said, we expressly selected for contributors who come at Marx from a dialectical perspective and subscribe to the contemporary salience of Marx’s critique of political economy. This seemed to us to open up exciting possibilities for indicating new (or re-motivated classical) directions in literary criticism since so much of literary criticism since the moment of “theory” has been predicated on the obsolescence of the law of value. In a way, you could say that the remit was: whither literary criticism in the age of the long downturn? To which we got some diverse modeling. I could say more about what patterns I see amidst this diversity, but I’d rather let readers of the volume draw their own conclusions. The matter of our current dismal political-economic present speaks to the first part of your question about what counts as “literature” for us. The inclusion of film and theater (along with fiction and poetry) does not stem from a heady sense of cultural-studies’ expansive potential; it simply reflects the fact of what English departments already teach and research.

Would you like to further elaborate on this periodization—“whither literary criticism in the age of the long downturn?”

“The long downturn” is Robert Brenner’s term referring to the capital overaccumulation and stagnation starting in the late 60s. There’s a debate about when it ended, if it ever did, and thus whether post-2008 is part of the same period. To phrase the question this way—”whither literary criticism in the age of the long downturn”—is also therefore to ask whether the post-2008 return to Marx represents something continuous or discontinuous from the return to Marx of the late 60s. On face, the two Marxes are opposite: the 60s Marx was the cultural Marx, while the post-2008 Marx is the economic Marx. But this is also a false antinomy, especially if one looks at culture and economy from a value-form perspective.

I was struck by the problem of value this anthology isolates—specifically, its tendency in the 80s and 90s to be interpreted in a way that emphasizes its mystery as it “transforms every object of labour into a social hieroglyphic,” such that literary and philosophical readings of Capital often “foreground the unknowability of the products of exchange in toto as the first principle for an aesthetics quietly drawn from Kant’s notion of the sublime” (12). A key intervention that this anthology makes in Marxian literary and cultural criticism lies in the collection’s resistance to this tendency—as you and Christopher Nealon write, the essays in this collection are “less inclined than their forerunners to think of capitalist production in terms of sublime unknowability, and more inclined to think about how capital is always reproducing the relation between the wage and what Michael Denning calls ‘wageless life’” (20). I’m wondering if you’d like to elaborate on the relationship between this shift in literary critical approaches to value and the anthology’s call for “a theoretical vocabulary that imagines capitalist accumulation not only in terms of its ability to reproduce the working class, or to subsume social relations, but in terms of the capitalist imperative to overcome a tendency towards diminished profits”—a vocabulary “that contends with the incorporation of ever more people in the ranks of what Marx called ‘surplus populations’” (8). For example, how would you characterize, or where would you locate the import of this new vocabulary in our ability to resist the “political melancholy” of conceiving capitalist production as sublimely unknowable?

What a great question. To answer somewhat literally, it’s a question of reading beyond chapter one (on the commodity form) of the first volume of Capital, to chapter 25 (the chapter on the general law of accumulation) and beyond, through the chapters on primitive accumulation (chapters 26 to 33). These latter chapters are the chapters in which the dynamic import of the value form gets played out in an account of capitalism’s violent beginnings and capitalism’s logical tendency toward crisis indicative of its historical unsustainability. I do think that the 80s and 90s offerings of cognitive mapping on the one hand and various versions of its impossibility on the other were undergirded by a belief in the indeterminacy of value. Was this the effect of the untested potentiality of fictitious (or speculative, money) capital in those same decades? I’m tempted to say yes. There was a frisson to be had from cultural turn (in which we thought that our critical purpose was to show that use value was an effect of exchange value). This was consonant with the ethical necessity of a melancholic stance toward history. Both are critical positions that were academically extraordinarily generative but neither of which I think we can now politically afford. The critique of political economy Marx practices in Capital models a method of granting the social objectivity of epistemological categories that are nevertheless shown to be entirely historical, and therefore changeable. Contrary to the stereotype of Marxism as a mechanical determinism, it provides a powerful argument for the agency of critical analysis, from which I think the humanities scholar can draw confidence in our social contribution.

Finally, I want to ask you about sentence that concludes your introduction: “Read together, these chapters allow us to imagine the wide range of relations to capital as ever-clearer grounds for new forms of solidarity, while remaining mindful that the political barriers to it may be higher than ever before” (20). Within the anthology, an “argument for the twenty-first-century interconnectedness of widely different literary genres and far-flung political struggles” emerges in the movement between each chapter’s arguments and objects—and, as you write, the anthology in turn situates itself within the social context of institutional defunding. Where do you see this gesture towards solidarity extending, and how do you see it mobilized within anthology?

We were just speaking of the way the English Department is where “literature” includes theater and film, and indeed much more. Perhaps the steady defunding of public higher education has since the 1980s always been the dark side of apparently counter-normative aspirations for interdisciplinarity—and in the case of the English Department, a factor in its methodological pluralism and identification with the mission of multicultural education. Of all the traditional disciplines, English was the greatest absorber of the 60s critiques of the university and its racial, gendered, colonial and imperial legacies. That’s why so much of professional training in literary criticism is about learning how to “hate English properly.” So there has always been reason to be aware of the determinate conditions under which literature students and scholars are supported in thinking that we can change the world (in however small a way), while also appreciating that we have been given that space to think that and try to pull that off. The latter is not to be minimized! With the even more acute contraction we’re seeing since the 2008 financial crisis and as a result of the policy elevation of STEM-based knowledges, which was the Obama Department of Education response to the 2008 financial crisis, we’re seeing a redefinition of the humanities as an enhancer of students’ creative faculties. This is a theme that a number of the chapters in After Marx—on trend lines in fiction publishing, on technology, and performance and service work— attend to, with implications for how we might study the materiality of gender, race and coloniality.