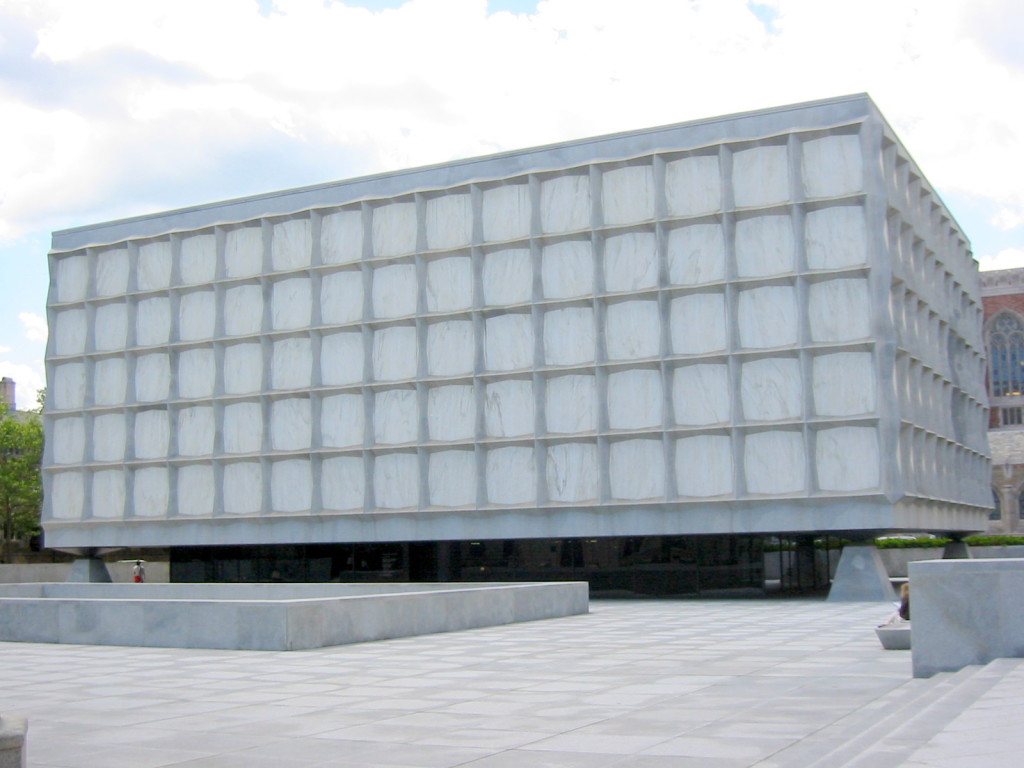 Kicking off the series is a reflection from Amanda Licato (’13), who visited the Alfred Stieglitz/Georgia O’Keeffe and the Jean Toomer archives at Yale’s Beinecke Library.

Amanda Licato will begin attending Stanford University in the Fall, as a Ph.D. student in the English Department.

Yale’s Beinecke Rare Book & Manuscript Library has a curious exterior: a pattern of uniform marble squares that offer no sense of the truly astounding contents inside. Yet once you step through the revolving glass door of the entrance, the ingenious logic of the design is revealed. A tower of rare books lies at the center of the building; the marble is thick enough to act as a shield, protecting thousands of rare documents from the outside world, yet thin enough to shed a translucent light on the inside. Surrounding the tower are some of the Beinecke’s most prized items, including the Gutenberg Bible and Audubon’s Birds of America.

My journey began below this floor, with a descent into the archives and to the Beinecke’s Reading Room, where a group of incredibly supportive staff and curators facilitate the research of faculty and students. During my week exploring the Jean Toomer Papers and Alfred Stieglitz/Georgia O’Keeffe Archive, staff assistant Mary Ellen Budney was my guide into these two incredible archives, engaging me in the peculiar histories of certain folders, photographs, and poems. My goal was to better understand the relationship between the writer Jean Toomer and the artist Georgia O’Keeffe. Toomer and O’Keeffe had been lovers for an elusive interlude in the 1930s but I was intrigued even more by the parallel paths they followed as artistic figures: both distanced themselves from the way their work had been received in the 1920s, first by finding inspiration in the world of steel and glass in New York City, then by spending time in the 1930s and 1940s in the wild countryside of New Mexico, where their work adopted a new Southwestern inflection.

Each day I returned to the archives, I was repaid with a renewed amazement at the materials I held in my hands. I valued the concrete reality of the papers and photographs I touched and of the ink I brushed over with my fingers. I remembered that at one time, the papers I held were once held by the two great artists to whom I am dedicating a portion of my life now, and who no longer inhabit this world. While typing and scanning typescripts and correspondence, I found myself imagining where Toomer sat as he scribbled edits on the typescript “Noises After Night.” I wondered what the day had been like on January 10, 1934, the moment O’Keeffe’s pen hit the paper as she confessed to Toomer: “I waked this morning with a dream about you just disappearing – As I seemed to be waking you were leaning over me as you sat on the side of my bed the way you did the night I went to sleep… I was warm and just rousing myself with the feeling of you bending over me.” I imagined all the hands that had touched the same documents before me, and all the hands that would touch the documents in the future.

My adventure at the Beinecke reminded me that archival work, whether in New Haven, Cambridge or Berkeley, is testament to the vastness of the literary world. So much remains unexplored, waiting to be unearthed and understood anew.