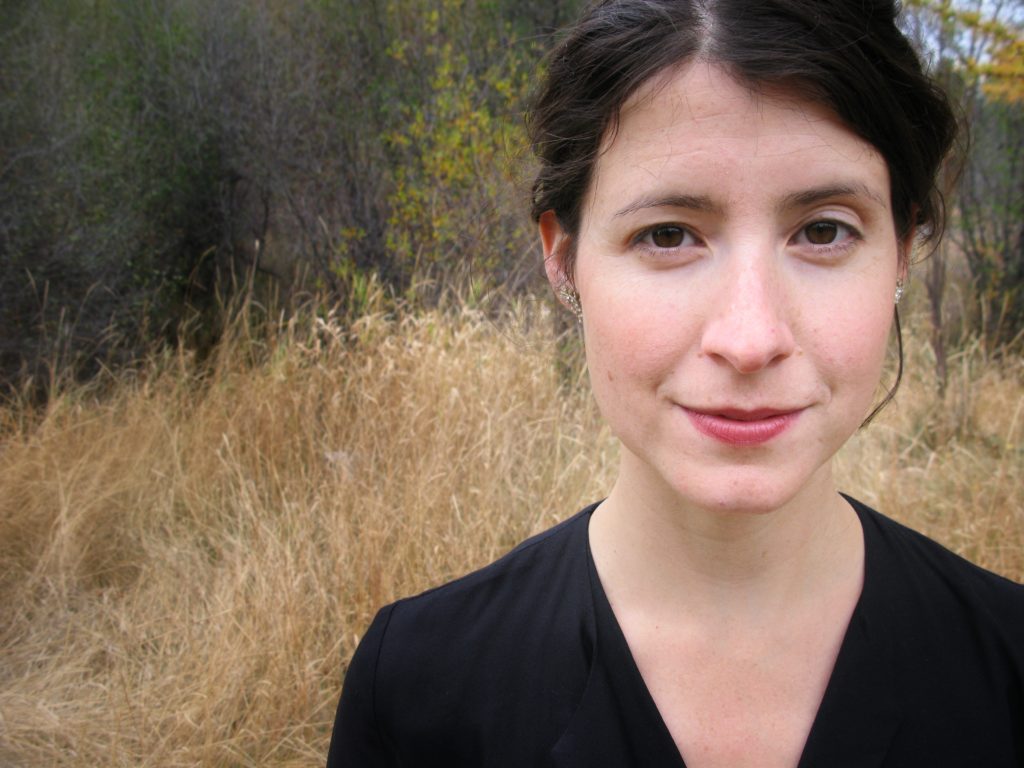 Last November, a delightful present arrived in my departmental mailbox: America Dancing: from the Cakewalk to the Moonwalk (Yale University Press), by graduate alum Megan Pugh (PhD, ’12). America Dancing rewrites the history of dance in this country by drilling deep into revealing moments of artistic innovation, and it does so with a tap-dancer’s panache and a poet’s gift for making the ineffable palpable. It’s a stylishly written book about a nation’s search for style in movement.

You needn’t take my word for it. Alastair Macaulay, dance critic for The New York Times, called America Dancing “valuable, original, refreshing, wide-ranging, mind-opening” — not to mention “marvelous” and “wonderful” — while praising the “dazzle” of Pugh’s learning and the vividness of her prose. Likewise the Boston Globe noted the “fancy footwork” that Pugh herself exhibited as she captured the nuances of dance performances, and commended her for her depth as a critic, her attunement “to the many ways meaning can encase other meanings and histories other histories.”

A poet as well as a literary and cultural historian, Pugh currently teaches American literature and culture at Lewis and Clark College in Portland, Oregon.

She was kind enough to respond over email to my questions.

Scott Saul: Your book has a lot of effervescence to it, but it begins with a story from 1939 that has a tragic dimension — of the black dancer Bill “Bojangles” Robinson being arrested in Times Square for “disorderly conduct” when he refuses a white policeman’s order to “get moving.” As it happens, Robinson refuses to move along because he’s admiring a neon sign of himself tap-dancing, an advertisement for a Broadway production in which he stars. Why did you choose to start your book here, with this parable about black bodies on the stage vs. black bodies on the streets?

Megan Pugh: The more I thought about this story, the more it meant. Bill Robinson was the greatest tap dancer of his time. His movements were displays of individual power and freedom. He took hold of space and sound, swinging, remaking, and inventing his own rhythms. He was poised, dignified, and playful. And he was assertive, going so far as to publicly shame racist hecklers at his stage shows—and, in this case, to talk back to the cop who arrested him. But Robinson was still a black man in a racist nation, so he was vulnerable.

Critics who’ve endeavored to define American movement often focus on freedom and individualism, and to some extent, that makes sense. But I didn’t want to neglect the fact that movement in this country—especially, but not only, the movement of non-white bodies—has been restricted, policed, even stopped altogether. We simply can’t account for the power and artistry of performances without considering the histories that shape and are shaped by them, as well as the histories that performances try to expose, flout, repair or reimagine.

Part of what moved me about this story from 1939 is that it puts all these ideas in spatial terms, in a kind of accidental symbolism: up on high, we see Robinson in a neon sign, playing, as it happened, an emperor. But that sign doesn’t end up outshining what happens on the street. I wanted to keep both perspectives in view throughout the book.

SS: With its extraordinary fluidity and reliance on the language of the body, dance is a notoriously difficult art form to capture in words. Yet by popular consensus you do it quite well. Do you think that your involvement with poetry—reading it, writing it, teaching it—had an effect on the prose here?

MP: My mother founded and directs a ballet company, so I grew up dancing, and talking about dance. I remember my teachers telling us to imagine that we had shining stars on our sternums to help us with our posture, or upside-down ice cream cones in our arms to give us more buoyant port-de-bras. Metaphor is helpful! That’s probably the most commonly given reason that poets make good dance critics. (Edwin Denby is the most famous example, and rightly so; the man is incredible.) But I think there’s more to it than metaphor. Gestures can hold many meanings at once, and poets understand this: their language can do the same thing. Poets also seem comfortable with, or at least galvanized by, the border between what falls outside of language and what they can wrest into words. Writing about dance means working at that border.

I love T. S. Eliot’s description of the mind of a poet, where “disparate experience”—his examples are falling in love and reading Spinoza— keeps “forming new wholes.” Poets don’t just see associations: they use these associations to build something new, albeit something you may not be able to map, let alone paraphrase, all that precisely. Poems, like dances, move.

All this is to say that, absolutely, poetry shapes how I think and how I write. That extends beyond the act of description and into the practice of cultural history: in the archive, you’re listening for echoes, patterns, connections and disconnections. Then you figure out what, if anything, these materials have to do with one another. The end result may not look like a poem, given that history involves arguments, causes and effects, and all sorts of conventions to which poems aren’t necessarily bound. But the habits of mind, at least for me, feel similar.

SS: Were there any particular writers — whether dance critics or cultural historians or simply great prose stylists— whom you read for inspiration and guidance? And what were the lessons you took to heart about how to translate a dance performance into written prose, and how to make it a subject of critical analysis?

MP: Can I start by giving credit to a field? Jean-Christophe Agnew and Michael Denning taught “The Formation of American Culture” when I was an undergraduate at Yale, and they’d connect, say, labor history, song, congressional policy and literature, in a single, stunningly well-wrought lecture. “Disparate experience,” to go back to that Eliot quote, kept forming “new wholes.” Prior to taking this class, I didn’t know that academia allowed such capaciousness. but as it turned out, there was a whole discipline devoted to it: American Studies.

As far as individual writers go, I’ve learned so much from scholarship by Daphne Brooks, Brenda Dixon-Gottschild, Elizabeth Dillon, Joel Dinerstein, W. T. Lhamon, Eric Lott, Jacqui Malone, Joseph Roach—this list feels recklessly incomplete. And there are many other critics I love to read, for their insights and for their prose: Deborah Jowitt, Manny Farber, Luc Sante, Ralph Ellison, Joan Didion—this also feels recklessly incomplete. Greil Marcus has been a huge and generous influence, as a writer and as a teacher.

But it seems wrong to limit dues-paying to explicitly “critical” writing. “Creative” writers—Ishmael Reed, Charles Chesnutt, Nella Larsen, Caryl Phillips—have done brilliant work on race and performance. Poets like Susan Howe, Robyn Schiff, M. NourbeSe Philip and C. D. Wright write about, among other things, ways that the past haunts, endures, gets tangled up or torn apart or lost altogether. I’d also like to put in a plug for Agnes de Mille and Paul Taylor, subjects of two of my chapters—they’re marvelous writers as well as choreographers.

SS: On a more personal note, you managed the incredible feat in writing and revising this book to publication in record time (publishing it a mere three years after filing your dissertation — about half the time that many scholars in the humanities take). And you did so while taking care of a young child, who’s now two-and-a-half years old. What advice do you have for those of us who are trying to find that elusive work-life balance?

MP: I am not at all sure that I’ve achieved anything like “balance,” but I do think parenting helped me become a more efficient writer. The first year of my son’s life, I was home with him non-stop, save for a few mornings of writing each week at the library or a café a couple blocks from our apartment. Those hours had to count: I was leaving my adorable child and paying a babysitter, and—because I’d gotten a book deal before giving birth—I had a deadline. Writer’s block was an unimaginable luxury. It helped that I already had the shape of the project, as well as drafts of some of the chapters, in place. I had done a lot of the hard thinking before sleep deprivation became a constant.

I also have a husband whose job provides enough support for our family—including health care— that my under-employment doesn’t feel as risky as it otherwise would. Right now, I work as an adjunct professor at Lewis and Clark, and while it’d be nice to have the job security (and the salary) of a tenure-line appointment, it’s also nice not to work full-time. I want to be very clear about how lucky I am. The academic job market is abysmal, and as my professors at Berkeley were right to point out to me many times, it’s probably especially abysmal for English PhDs who have stubbornly written about something other than literature. But I wrote the book I wanted to write; my family and I live in a city we like; I get to teach, which I love; and I spend whole days each week with my son. Does any of this make me qualified to give anyone else any advice? I don’t really think so. I do give a cautionary spiel—that’s probably too mild of a description—to any of my students who express interest in going to graduate school in the humanities. And yet I’m very glad I went to grad school– to Berkeley in particular!

SS: I’ve read that you’re working on a series of poems about baseball, with your fellow Berkeley English PhD grad Gillian Osborne. As the new season has just started up, could you offer us a poem to prime us for it?

MP: I wish I could give you the next installment, which I’ve owed Gillian for several months. You can take that as evidence of how elusive that parenting/writing balance is! Instead I’ll link to two selections of the project that have been published online, in Cobalt, and in Boom: A Journal of California.  Some background: Gillian and I started swapping these poems after we watched Matt Cain pitch a perfect game at AT&T Park in 2012. They take their structure from a ball game (she bats first, I bat second), and from epistolary literature: we are two women, writing one another about all sorts of things—place, gender, family, fandom—as well as fellow feeling. As it turns out, at least in my halves of the innings, there’s a lot of crying in baseball.