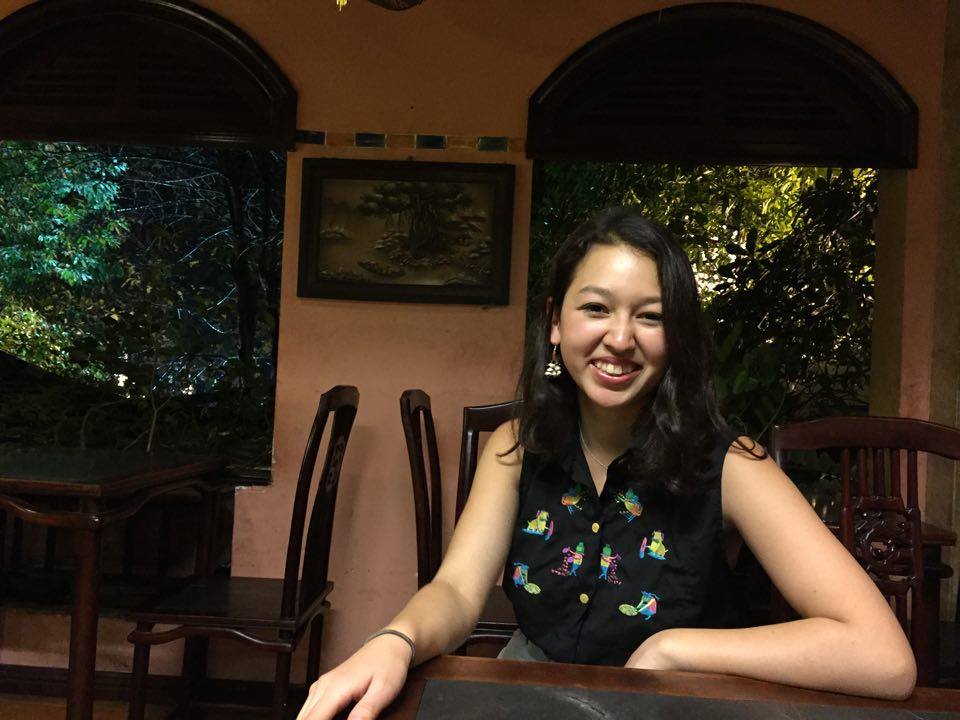 Every May, The English Department awards the Hugh and Velma Richmond Prize for the best essay of the year on Shakespeare by a non-senior English major. Below is the winner for the 2015-2016 academic year, an essay written by Miyako Singer for Professor David Marno’s Fall 2015 Shakespeare 117S course.

The Dark Side of the Moon: Dew and the Breakdown of Illusion in A Midsummer Night’s Dream
by Miyako Singer

In William Shakespeare’s A Midsummer Night’s Dream, dew is the stuff of fairies, the winged inciters of confusion, delusion and merry havoc amongst the four lovers and fairy monarch of the play. The fairies sprinkle dew onto flowers, adorning the forests with pearl-like spheres of water and setting a perfect scene for love and madness and youth. Dew is the other liquid in the fairy’s arsenal, right beside the floral love juice which drives the play’s plot. Where the love juice inspires pure delusion, the dew serves as a counterpart, appearing at moments of ambiguity where boundaries between apparent opposites are blurred and the darker underbellies of happy illusions are exposed, if only briefly. These drops of water may not expose, but they do bring the smallest hint of clarity amidst the madness of the forest.

The love juice is the accidental product of Cupid’s failed aim at a virgin priestess monarch, the result of Cupid’s bow’s piercing of a flower whose juice consequently harnessed the power of inducing instantaneous love. Dew here is similarly the product of a chaste, powerful woman, the goddess Diana, and though it does not induce love in so clear-cut a manner, it is a tool of fairies in embellishing the forest appropriately for lovers. Right before the lovers enter the forest, a fairy is hard at work, busying himself with the typical work of his kind. “And I serve the Fairy Queen/To dew her orbs upon the green,” (2.1.9-10) the fairy says as he sprinkles the dew onto the forest’s fairy rings. Then he continues and notes that he “must go seek some dewdrops here/And hang a pearl in every cowslip’s ears.” (2.1.14-15) It is his job to set the forest’s twinkling, romantic tone, to hang dew like a jewel onto each blade of grass and flower.

Elizabethans believed dew came from the moon.[1] The moon at once references Diana, the goddess of chastity and the hunt whose emblem is the moon, as well as nightfall, which is “a time that lovers’ flights doth still conceal,” (1.1.212) the perfect time for young lovers to escape. For Lysander and Hermia, their escape is literal as they run from the Athenian law which would have Hermia dead, cloistered or married to another, but it also serves as a fanciful, emotional escape from social mores and the rules of daylight. There is an odd dichotomy set up between night as a time for lovers and fairies and less than chaste revels, dubbed “fairy time” (5.1.350) by Theseus by play’s end, and night as a time when Diana’s moon emerges, shining over her virgin forest. In describing life in a cloister, Theseus declares that the nuns spend all their hours “chanting faint hymns to the cold, fruitless moon,” (1.1.73-4) envisioning a moon which is barren and cold and hard. For Demetrius, nightfall and the emergence of the moon bring to mind Diana too.

Her silver visage in the watery glass

Though Demetrius speaks of Diana[2], his night is not barren or hard or at all influenced by the staunch virginity of Diana. For him, night is for romance and it is here that we see the first mention of dew in the play, though not the word itself. The “liquid pearl” which the moon places upon the grass is dew. Dew here is derived from a moon which is the personification of a famed virgin who would kill a man for seeing her unclothed, as well as a moon which is perfect cover for young lovers. The strange intersection of chastity and lust is underscored in a later passage, when Titania has been anointed with the love juice and has consequently fallen for Bottom, a weaver sporting an ass’s head. To her fairies, she says “The moon methinks looks like a watery eye/And when she weeps, weeps every little flower/Lamenting some enforced chastity.” (3.2.179-181) Not only does Titania imagine a moon unmoored from the chastity of Diana, she imagines a moon which weeps at the very thought of chastity. Titania’s moon actively supports love and the deed which follows, and expresses her sorrow in the form of dew— tears manifested on Earth’s flowers. Dew here parallels the disparity between the love juice’s chaste origins and its unchaste implementation, revealing the blurred line between a virgin moon and a moon which shields lovers, encouraging their fond revelry.

That Titania equates dew with tears brings up another ambiguity- the closeness of love and sadness in the play, the cruel undercurrent which accompanies love and merriment throughout. There is a melancholy to passages on dew absent in the raving love speeches which the love juice spurs. The love juice induces hyperbolic platitudes, Lysander’s first words upon awaking under the influence of the juice is “And run through fire I will for thy sweet sake.” (2.2103) The language of the love juice is loud, declarative, passionate and made up of all the most prosaic expressions of love. The language of dew, on the other hand, is more melancholic, pretty but repeatedly compared to tears. Oberon too draws this analogy, again in reference to Titania and Bottom. Here dew is imagined to be the embarrassed tears of Oberon’s queen.

And that same dew which sometime on the buds

Was wont to swell like round and orient pearls

In Oberon’s fantasy, his love juice machinations have reduced his wife to shameful tears after he has taken from her the coveted Indian boy, as well as seen her disgraced. Of course, Oberon and Titania’s marriage is not a terribly happy one from the beginning, characterized by jealousy and arguments so inflamed that they alter the weather, yet the active pursuit of a spouse’s sorrow seems to violate even the most minimal code of marital decency. In this instance of dew, Titania’s imagined sadness by her husband and their jealous, scheming relationship complicates the joyous marriages with which the play ends by allowing a glimpse into what a marriage can be once the metaphoric, oratory of young love fades into the everyday, mundane pattern of an extended union.

The giddy mirth of the fairy world is also characterized by a darker underbelly, colored with a tinge of cruelty. Robin, that “merry wanderer of the night,” (2.1.43) takes pleasure in jest, in misleading horses and making old women fall from their stools. In recounting his list of tricks perpetrated on people for the sake of making merry, Robin uses the word “dewlap” which refers to the withered, loose skin on the neck. The fresh, morning youth which the word dew conjures is at odds with the loose skin of the elderly, another moment where the buoyant gaiety and youthful love of the fairy world is revealed to be something else beneath the surface. Sometimes Robin pretends to be an apple in an old woman’s drink and “when she drinks, against her lips I bob/And on her withered dewlap pour the ale,” (2.1.49-50) causing her to spill her drink. Robin’s merry mood, as well as Oberon’s, for whom he does all this in order to “make him smile,” (2.1.44) come at the expense of other’s misfortune. Robin finds joy in the kind of slapstick which is amusing to the viewer but annoying, even painful, for the unintended player. The source of his happiness is hardship for others, just as Oberon’s joy is derived from Titania’s pain, or even the mere thought of it. Joy in the fairy world is inextricably intertwined with misery.

Dew seems to be an agent which attempts to find clarity in the murk, to sort out truth from lie and air out the dirty findings. Titania describes the same moon from which dew comes as “the governess of floods/Pale in her anger, washes all the air/That rheumatic diseases do abound.” (2.1.103-5) The moon governs water and “washes” the air, a word which here means “moistens” but can also be read to mean cleansing. Yet this cleansing action brings about “rheumatic diseases,” infecting the air, implying that what the dew does in terms of cleaning is not wash away the dirtiness but to deliberately call attention to it. Clarity does not mean it is scrubbed clean but that the happy delusion is peeled back slightly to reveal some truth. That dew is purely water contrasts its clearness, its capacity for lucidity, with the dark color of the love juice, turned “purple with love’s wound.” (2.1.167) Again and again, usage of dew points to a revealing of a dark, other side- the tears shed for love, the downsides of marriage, and the meanness in merriment.

Dew shows up again in the moments immediately before and after the effects of the love juice are lifted, for Lysander at least. Hermia, the last of the four to fall asleep in the woods, lies down exhausted and “bedabbled with dew” (3.2.443) and promptly falls asleep. Four lines after she falls asleep, Robin appears to return Lysander to his former state of affection. When the four lovers are just awaking from their dreamlike night, Theseus walks by, talking about his hounds to Hippolyta, declaring that his dogs have “ears that sweep away the morning dew/Crook-kneed and dewlapped like Thessalian bulls.” (4.1.119-20) It is significant that dew is mentioned so repeatedly in the moment at which the couples awaken and emerge from the forest to find themselves no longer under the sway of the love juice’s delusions, at least for one of the affected men. Dew here signals a transitional moment as the lovers, for the most part, return slowly, unsurely and confusedly into a state of reality.

The lovers, when awake, cannot distinguish fully between reality and illusion, between their waking and sleeping moments. It is precisely in these hazy in-between moments that dew appears, both naturally and textually. Dew decorates dawn and twilight, the indefinable hours between the concrete, the sort of hours dominated by fairies. Dew is revelatory in the smallest doses, striving for clarity amidst the havoc wreaked by the love juice. There are flashes of underlying truths in moments when dew appears, or at least a calling of attention to apparently contradictory elements. Dew here shares a similar origin story to the love juice, and is another implement of the fairies in their construction of a fantastical forest scene, but diverges in the way that it hints at the darker side of love and mirth. Drop by drop, the dew clears away the cheerful veil and exposes the lust and melancholy and pain just below the surface.