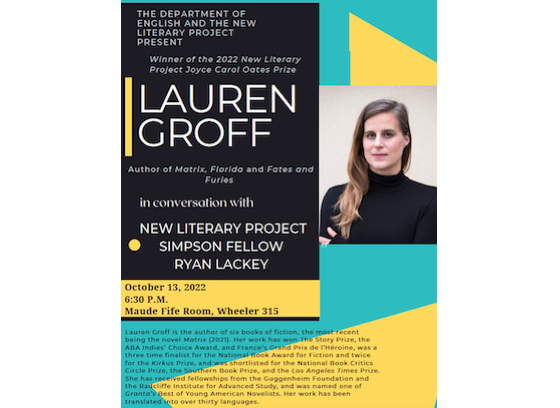 The Department of English and the New Literary Project present

Author of Matrix, Florida, and Fates and Furies

Lauren Groff is the author of six books of fiction, the most recent being the novel Matrix (2021). Her work has won The Story Prize, the ABA Indies’ Choice Award, and France’s Grand Prix de l’Héroïne, was a three time finalist for the National Book Award for Fiction and twice for the Kirkus Prize, and was shortlisted for the National Book Critics Circle Prize, the Southern Book Prize, and the Los Angeles Times Prize. She has received fellowships from the Guggenheim Foundation and the Radcliffe Institute for Advanced Study, and was named one of Granta’s Best of Young American Novelists. Her work has been translated into over thirty languages.